It won’t be exaggerating to call the Indian Premiere League one of the most celebrated annual events when it comes to sports. The IPL is not only an event entertaining millions of fans all over the world, but it is also a multi-billion dollar business, with its value being a whopping 4.16 billion dollars as of 2016.

With 60 matches spanning approximately 47-51 days every year, the IPL has thousands of spectators for every match. Stadiums are flooded with spectators during each match, so much so that country’s largest stadiums, with a capacity of 70 to even 90 thousand people, go full. Naturally, this calls for extraordinary and copious amount of security management. 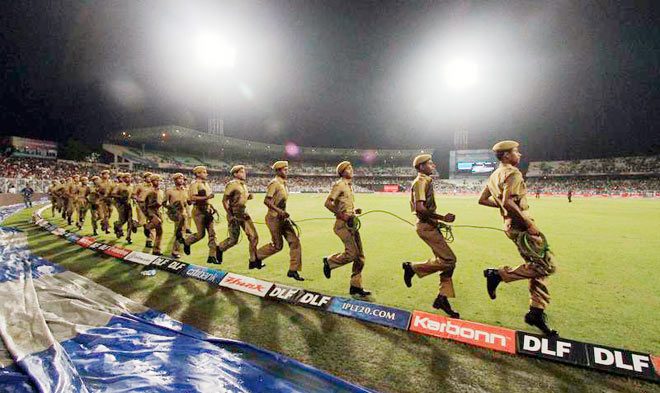 Hundreds of police officers are deployed for the mammoth task of entrusting security of not only spectators, but also of the highly admired cricketers, who come to India from all over the world for the event. However, it is easy to imagine that only the police force cannot be enough to tackle the same. This is when private security intervenes.

A number of security wings are established to handle different arrangements, which include audience security, traffic management, armed forces, fire fighters, and law and order. The entire area is under constant surveillance with the help of 80-90 CCTV cameras, which cover not only the stadium, but also the surrounding area. Control rooms are provided to monitor the footage on a regular basis. Security personnel are provided with facilities of walkie-talkies and scanners in order to increase the efficiency of communication and inspection. Check posts are created at each gate of the stadium that provides entry, in order to check for explosives or any dangerous goods. In fact, spectators are not allowed to carry items like knives, lighters and even paint inside, for security purposes, thus leaving little room for danger.

Extra guards are deployed for patrolling the whole area as well as for traffic surveillance and management. Escort vehicles are set up for the same. Moreover, during more pressing conditions, a bomb disposal squad and guard/sniffer dogs are also provided to ensure safety.

Intricate care is also taken about other aspects. Guards are present in the aid of women against cases like eave teasing. Inspection is also undertaken to check the prices of food items and beverages being sold, in order to dismiss overpriced or forged sellers. Security is also provided in parking areas in order to manage chaotic situations and provide proper parking to thousands of vehicles. 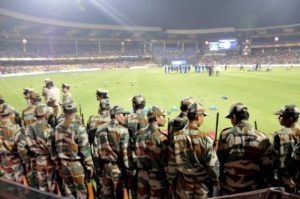 Additionally, a handful of bodyguards are provided to each player, to ensure their safety and to take care of their needs. Similar services are also given to the coaches, representors, ambassadors and other important individuals. They are also provided with police men for the time they are in the country in order to ensure constant security.

It indeed takes a lot of time, energy, capital and management for smooth execution of such events, and the security services clearly have a huge role to offer in the same.

HP Facility Management Services has given its security services even in IPL. HPFMS has executed the security work successfully in IPL for the whole season in Pune. It has been a learning experience and a test for HPFMS’ ability to manage such a daunting task which requires utmost coordination and alertness which HPFMS has passed with flying colours.